Capital Health Care NetworkWe are Cooking Up Something Great at Scioto Community!


We are very excited to announce the appointment of Chef David Evans at Scioto Community. Dave is from a little town in West Virginia called Mount Hope. He is one of 13 children, so a lot of eating was going on in Dave’s family! He learned his love of cooking from his Mother who was a homemaker and cooked mostly from scratch.

“I was always amazed at how much my mother did with so little ingredients. She is the one who taught me most of what I know about cooking,” said Dave. In 1979, Dave joined the U.S. Army as a cook. After the Army, he worked for a few different hotels including Ramada, Holiday Inn and Marriott Resorts. Dave tried to leave food service a few times but kept coming back to what he loves.  He worked as a Food Service Director for 10 years then opened his own catering company. Dave has won many awards and accolades for his barbecue!

We are very excited to have him directing our culinary program at Scioto Community and look forward to all the amazing things he will do with our food service at Capital Health Care Network. 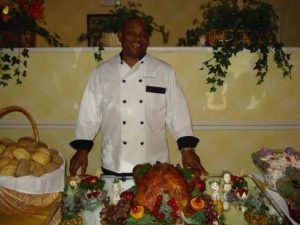